Heaven welcomed a remarkable human being when Dusty Rhodes peacefully passed away on Sunday, July 11, 2021 at home after a long battle with brain cancer. He was the son of Ernest “Ernie” LeRoy Rhodes Jr. and Patricia (Longsdorf) Rogers. He was born July 21, 1967 and grew up in Hinckley/Big Rock, Illinois. Dusty was united in marriage on December 31, 1992 to his wife Abby (Lindblom) Rhodes. They spent the next 28 years together living in the Kendall County Area. He had been employed in the painting/coating industry for many years at different companies. Dusty was also active at his church, Yorkville Congregational Church United Church of Christ, and sang in the choir. He enjoyed coaching his children’s athletic teams, and played many different sports throughout his life. Dusty enjoyed playing poker with his local gang, as well as playing poker and bags with his Okie-Vegas friends.

Dusty was preceded in death by his father, Ernest Rhodes Jr.

He is survived by his wife, Abby Rhodes; children, Lauren Rhodes, Megan Johnson and Brett Rhodes; his grandchildren, Liam Rhodes and Chris Johnson Jr. He is also survived by his mother, Patricia Rogers; his sister, Kim (Gary) Baie; niece, Stephanie (Brian) Long all of Hinckley; nephew, Chad (Lindsay) Baie of North Aurora, and many cousins.

A Celebration of Life will be held July 24, 2021 at Yorkville Congregational Church United Church of Christ. Located at 409 Center Parkway Yorkville, IL 60560. Visitation to be held 10am-Noon with a service and luncheon to follow.

OUCH. We were not even mentioned. Dusty was adopted in a prearranged adoption. The name on his birth certificate should read, “Michael Patrick Larson” but his adopitive parents chose not to tell him. The story was that he was given up by a young college student. Which is totally a crock. Sharon Joan Ippen Gibbons was his birth mother. The last name Larson came from his Great Grandmother. I am is blood 1/2 sister, Vicki Marie Gibbons. He has 2 other 1/2 brothers Mark Richard Gibbons and Christopher Thomas Gibbons. I found Dusty not even a month after our mother died. (Also found his birthfather ~rip~ William Alfred “Mick” Finnan and more 1/2 siblings) This story is not over.

I’m making peanut butter cookies. I polished off a jar of peanut butter and put the lid on tight. The trashcan is across the kitchen. I decided to toss it in from where I was standing. I toss it. It hits the back rim then bounces to the back wall. It then hits the front rim and falls to the floor. It starts rolling and rolls slowly up to my feet and stops right before touching me. REMEMBER, the trashcan is across the whole kitchen.

Early 80’s….maybe 1981, Michael Anthony came to the Castle Park in Riverside, California. I was working the snack bar. I calmly asked this handsome man, “Aren’t you the drummer for Van Halen?” He just looks at me kind of puzzled and says, “I’m the bass player.” I felt so dumb at that moment. I knew that… but I was star struck. I sure blew that moment.

I have always wanted to go fishing. When I was in the 5th grade we lived in Mundelein, Illinois. I walked to this lake with my bamboo pole in hand and a safety pin for my hook. Hoping for the best. I sat there all day. Nothing.

1978-79? I worked at a place called TACO HOUR in Downey or Norwalk, California next to a Kmart. It had a clock on the face of a giant donut. We had the best food! We experimented making things. I had so much fun there. When I first applied for the job, the owner hired me on the spot because I filled out my application faster than anyone else. It had big steam tables that to turn on or off you had to stick your arm under it where the flames were. Only burnt my arm one time… that’s all it took! Beano’s were 50¢. Two little corn tortillas with beans and whatever else you wanted. It was like a little Mexican sandwich. Ohhhh so good. The owner also taught me how to cut onions! (This is not the correct photograph, but close) I also worked at that Kmart for a short time.

5th grade in Mundelein Illinois,  I don’t remember the reason but my mom spent a lot of time making little finger sandwiches in the shapes of these cookie cutters…heart, diamond, spade, and club for a party in my the classroom. I do remember they were a big hit among all the kids in the class. Maybe 1968? My mom was wonderful,♡ Sharon Joan Ippen ♡ STILLMAN STRONG

2010 was a really bad year. The Capri Motel in Butte, Montana put the boys and I up for free. We were homeless and trying to head back to Arizona. The year my mother died. It was late fall because there was snow on the ground. Salvation Army paid for a couple nights and Capri gave us one more night because of the bad weather. I have a Matchbook cover that I just bought on eBay to add to my memories. My wonderful niece Bridget Heather Gibbons brought us a pizza dinner to the room our last night there. 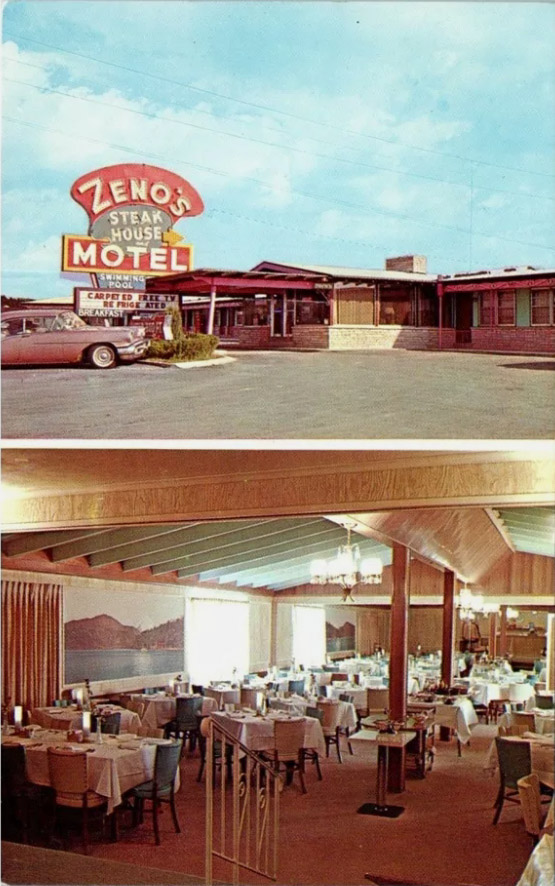 We stopped here many years ago. We were staying at The Drury Inn just east of Zeno’s Motel. Picked up matchbooks or whatever I could find for my friend Xeno, Randall Hogan. This motel is now closed/gone. I just bought a postcard on eBay for my personal memories of traveling back and forth to and from Illinois/California/Arizona, we always passed the billboard advertising this Motel. Rolla, Missouri ROUTE 66. I remember it long before this trip. So thankful that I stopped this one time and went inside ♡ Max and Harry must have been babies. I am almost positive that my niece Holly was also with on this trip. I do remember it was raining.~vicki~ 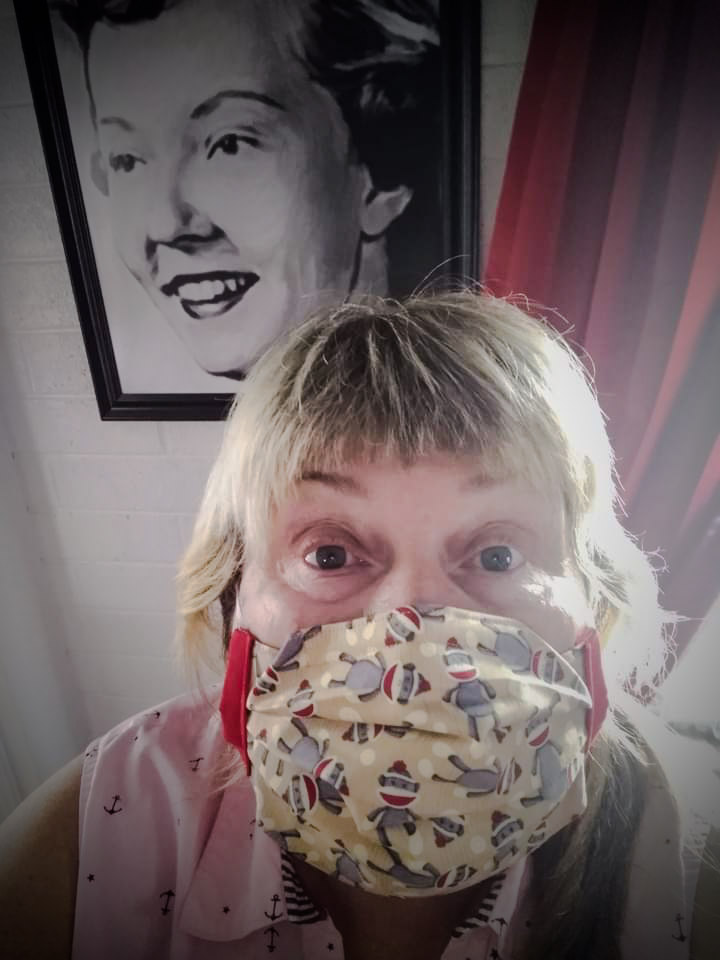 This world makes me cry
This world has developed a nasty sour taste
And yes, I will wear my mask forever in public
As it hides the fact that I can no longer smile 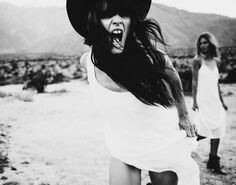 WALMART JULY 26, 2020
Well that was almost a panic attack. My chest hurts. Went to Walmart for the first time since Feb. WTFlip did I buy? 8 cans of tuna. 5 – 1 pound rolls of frozen turkey meat (mechanically separated), 2 vegetable oil sprays, tomatoes which were bad so I didn’t get many, 2 bottles of mouthwash, 2 strawberry apple sauces..the 8 pack minis for work…. IT DIDN’T MAKE SENSE. I haven’t been inside Walmart since the remodel and I was lost. People are A-holes. Nobody follows the signs on row directions. What part of DO NOT ENTER don’t you understand? I was vocal about it. BUT…..Good things do happen here ***Lots of real cashiers!!! I love real cashiers ♡ Social Distancing waiting in line and this guy behind me was breathing down my neck. When the people ahead of me moved up…he tried to go ahead of me…REALLY??? I AM A PARANOID WOMAN HAVING A HOT FLASH…. DON’T EVEN TRY IT BUDDY